Ashley Judd is featured on the cover of Time Magazine’s Person of the Year for her role in the #MeToo movement.

The actress, activist and University of Kentucky graduate is joined on the cover by software engineer Susan Fowler, lobbyist Adama Iwu, singer Taylor Swift and strawberry picker Isabel Pascual. The cover features the headline The Silence Breakers: the voices that launched a movement.

The Silence Breakers emerged with allegations of sexual misconduct. The list of accusers increased, as high-profile actors, politicians and journalists were accused of sexual harassment. The magazine said it was “one of the highest-velocity shifts in our culture since the 1960s.”

Judd was one of the first accusers of the now-disgraced film executive Harvey Weinstein. She spoke last week “from the heart” at the Singletary Center for the Arts on UK’s campus about how she’s using her voice in the fight against abuse and sexual misconduct in Hollywood and around the world. Judd’s experience with Weinstein, was published by The New York Times in early October.

“There is naturally a chaotic, messy, unprecedented socio-cultural sexual change, a reckoning as some folks are calling it, happening around us,” Judd told a hall full of students and university faculty. “And it won’t be tidy and it won’t be easy. We don’t have a playbook.”

Time editor-in-chief Edward Felsenthal said the men and women vocal in the #MeToo movement were worthy recipients for Person of the Year “for giving voice to open secrets, for moving whisper networks onto social networks, for pushing us all to stop accepting the unacceptable.”

“The galvanizing actions of the women on our cover…along with those of hundreds of others, and of many men as well, have unleashed one of the highest-velocity shifts in our culture since the 1960s,” Felsenthal said in a statement. 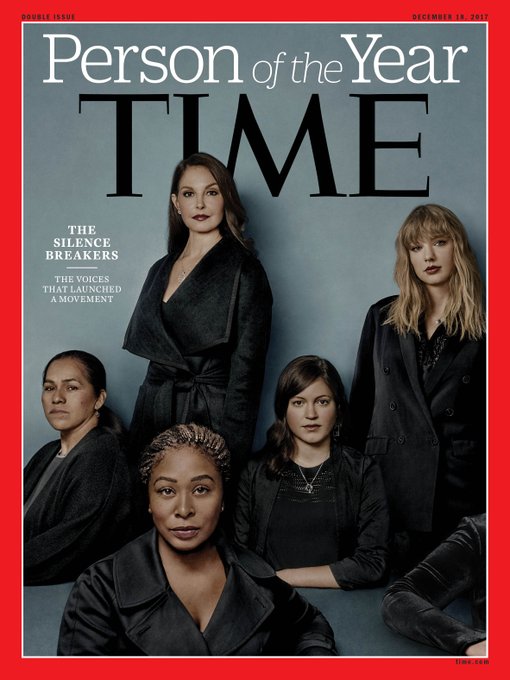 In her interview with Time, Judd said there was no route to stop the abuse, despite Weinstein’s behavior being an open secret according to one of her screenwriter friends.

“Were we supposed to call some fantasy attorney general of moviedom?” Judd asks. “There wasn’t a place for us to report these experiences.”

Twenty years after Weinstein’s alleged harassment, Judd went on the record about his behavior in the New York Times article. She was the first star to come forward, and was not the last.

“We need to formalize the whisper network. It’s an ingenious way that we’ve tried to keep ourselves safe. All those voices can be amplified. That’s my advice to women. That and if something feels wrong, it is wrong – and it’s wrong by my definition and not necessarily someone else’s.”

Swift was vocal about harassment by Denver DJ David Mueller, but she was sued for millions in damages when Mueller was fired from his job. Swift countersued and in court she told Mueller’s lawyer, “I’m not going to let you or your client make me feel in any way that this is my fault.” She won the case.

A blog post from Fowler led Uber CEO Travis Kalanick to resign and the multibillion-dollar company to fire at least 20 employees. A former Uber engineer, Fowler said she was sexually harassed, ignored by the company’s human-resources department and threatened by her manager for reporting the allegations, according to Business Insider.

The lobbyist Iwu said she was groped in front of several colleagues at an event and was shocked when none of her male co-workers attempted to stop the assault. A week later, she organized 147 women to sign an open letter exposing harassment in California government, Time said.

Pascual, who used a pseudonym to protect her family, was a victim of a harasser who stalked her and made her feel powerless. She was among the California farmworkers who marched on the Hollywood streets in November to express their solidarity with the stars, according to Time.

After a few victims made their experiences public, the #MeToo hashtag took off in social media with men and women sharing their own stories.

As of Oct. 24, #metoo had reached into 85 countries with 1.7 million tweets, CBS reported. That was after actress Alyssa Milano helped popularize the phrase when the first stories emerged detailing some of the accusations against Weinstein.

“It became a hashtag, a movement, a reckoning. But it began, as great social change nearly always does, with individual acts of courage,” Felsenthal said.

Time announced its shortlist of 10 candidates on Monday. The choices ranged from Jeff Bezos, the founder of Amazon, to Robert Mueller, the special counsel investigating whether or not the Trump campaign played a role in Russia’s attempted interference in the 2017 election.

Just last week, the 2016 Time Person of the Year and this year’s runner-up — President Donald Trump — made waves when he took to Twitter saying that he’d been told he would likely get the slot again in 2017, but that he’d turned it down.

The announcement was made Wednesday on NBC’s “Today”, where host Matt Lauer was fired last week after harassment allegations. “Today” host Savannah Guthrie acknowledged Wednesday that this year’s winner hits “close to home” and mentioned Lauer by name, according to the Associated Press.

Time has been selecting a Person of the Year since 1927, according to the magazine.