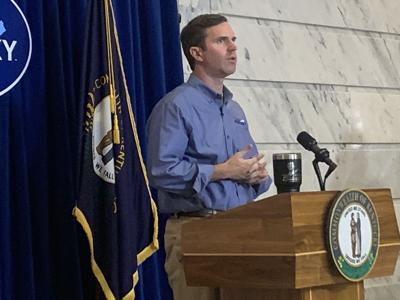 FRANKFORT, Ky. (WDRB) — Gov. Andy Beshear said the settlement in the Breonna Taylor wrongful death lawsuit was a positive development that could provide a roadmap for statewide police reform.

“Both the city of Louisville and Breonna Taylor’s family agree that this is a positive step,” Beshear told reporters at the state Capitol.

“I think that the family acknowledged that it was a step that shows that the city does care,” he said.

Beshear did not comment on the $12 million financial terms of the deal, but said the police reforms such as training, use of force, and the process for issuing search warrants should be looked at statewide.

“I think that there are certainly areas of improvement, some may be these, some may be others that we can and should talk about,” the governor said.

Beshear said he likes the idea of body cameras for Kentucky State Police, but added that cost of the server and storage has been an obstacle.

The governor said talks continue about a possible special session on police reform, but repeated that he would not call it without an agreement on a bill that he said moves the state forward.

“It can’t be window dressing. It can’t be small steps,” said Beshear. “It’s got to be significant.”

The governor, a former attorney general, also said he hoped that the Taylor settlement would spur Attorney General Daniel Cameron to finish the investigation into Taylor’s shooting.

Cameron said in a statement, “The civil case involving Ms. Breonna Taylor is separate from our office’s ongoing investigation into potential criminal violations of state law. That investigation continues.”

Cameron has given no timeline as to when he’ll make his announcement.