Bevin: No Role In Dismissal Of Lt. Governor’s Aide

Kentucky Gov. Matt Bevin said Monday that he doesn’t know anything about the circumstances leading to the dismissal of a key aide to his lieutenant governor — a shake-up that prompted Lt. Gov. Jenean Hampton to send out a tweet asking for prayers in her fight against “dark forces.” 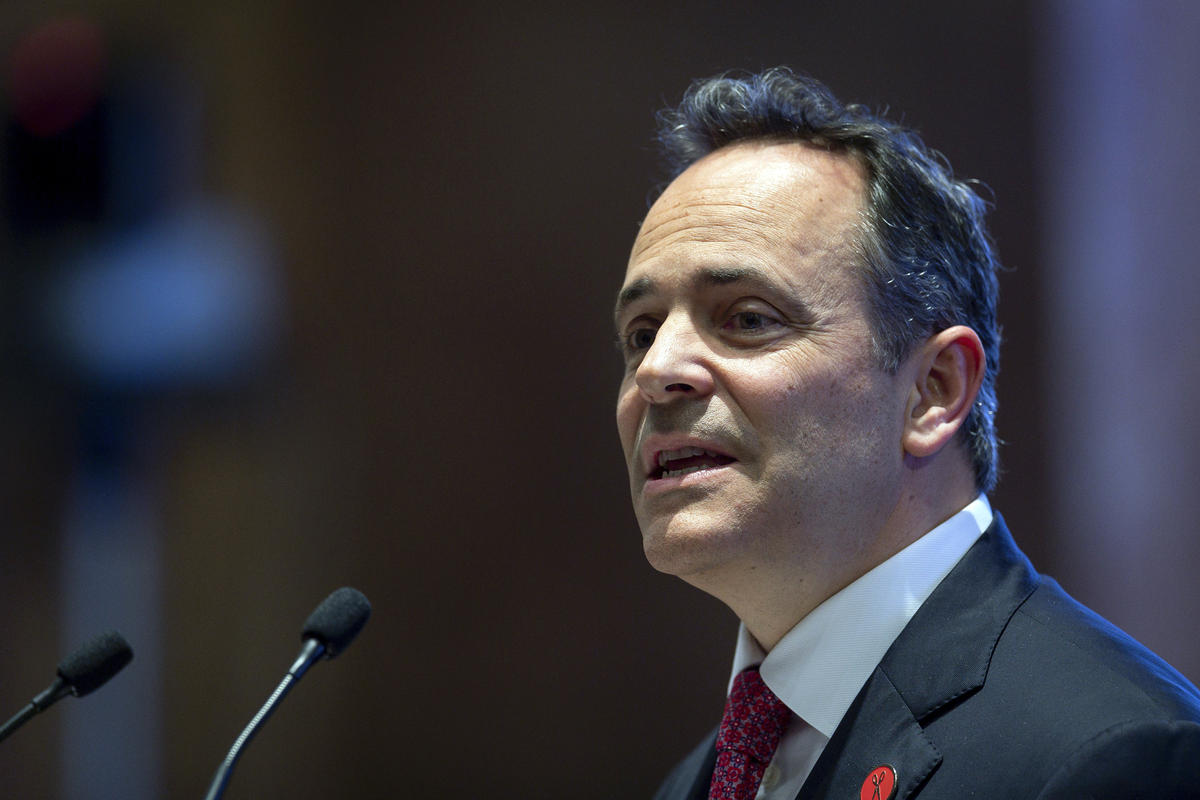 Bevin told reporters he was surprised by Hampton’s recent tweet, and the Republican governor indicated he had no involvement in the dismissal of Hampton’s deputy chief of staff.

“We have 30-some-thousand people who work for state government, and people are hired and people are let go on a regular basis,” the governor said. “I don’t have any knowledge of the situation involving this individual.”

Bevin dropped Hampton from his ticket as he launched his reelection campaign. Hampton has said little publicly about her removal from the ticket. But the dismissal of her top deputy intensified her feud with Bevin’s administration over staffing shake-ups in her office.

In her tweet last week, Hampton said she didn’t know who initiated the “unauthorized personnel action ending (the) employment” of her deputy chief of staff, Adrienne Southworth.

Hampton praised Southworth for her “stellar” work and said the ouster went against her wishes. Hampton’s tweet ended with a request that people “pray for me as I battle dark forces.” She didn’t elaborate in the social media post.

Meanwhile, Hampton sent a sharply worded letter to a top official in the state Finance and Administration Cabinet directing officials to reinstate Southworth.

“I did not advise or authorize you to terminate employment of Ms. Southworth,” Hampton wrote. “I was not consulted in this action, and I fail to understand how my staff can be terminated without discussing matters with me, their immediate supervisor.”

“In the future,” she added, “you are not to execute any personnel action involving my staff unless you have my express, written permission.”

Bevin said Monday that he has spoken with Hampton about the matter.

“I heard about it first from her,” the governor told reporters. “And again, I don’t have any more information than she has.”

Bevin was not asked about Hampton’s letter asking that the staff assistant be reinstated.

Asked who made the decision to dismiss Hampton’s aide, Bevin replied: “These things are always done through Personnel. There’s a method, people aren’t let go indiscriminately. There’s always reasons, but as you would expect, and as is policy, we don’t ever talk about specific personnel issues.”

Southworth’s dismissal marked the second time this year that Hampton has feuded with Bevin’s administration over the removal of one of her key assistants.

On Friday, when a Hampton aide was asked how many staff members are working in the lieutenant governor’s office, the aide replied: “Right now, it’s me.”

Hampton has had a small role in Bevin’s administration, traveling the state to meet with school groups while promoting entrepreneurship and science, technology, engineering and mathematics education for girls.

Bevin dropped Hampton from his ticket in January as he launched his reelection campaign. Bevin chose state Sen. Ralph Alvarado as his running mate this year.

Hampton, who has strong support among tea party activists in Kentucky, had lobbied Bevin to retain her as his running mate. The Republican governor is being challenged by Democratic Attorney General Andy Beshear in this year’s November election.

Bevin also on Monday signaled that he has agreed to changes to his pension-relief plan as he continues trying to win enough support to take up the measure in a special legislative session this month.

The Republican governor has worked for weeks trying to build support for his proposal in the GOP-led legislature. Bevin didn’t indicate when he might call lawmakers back to the state Capitol to deal with the issue, but said he has agreed to revisions to his plan. The proposal aims to provide relief for some state-funded agencies struggling with surging retirement payments.

“It’s been amended on a number of fronts,” the governor said. “We’ve actually made changes to accommodate some of the things that people say they’d like to see.”

Bevin didn’t offer specifics. The governor is grappling with the politically treacherous pension issue as he seeks reelection this year. Bevin is being challenged by his political nemesis, Democratic Attorney General Andy Beshear, in the November election.

Bevin’s proposal would replace a pension measure that he vetoed in April after lawmakers ended this year’s regular legislative session. Top lawmakers, caught off guard by the veto, have said it’s up to Bevin to line up support for his plan.

Unless action is taken, regional universities as well as county health departments, rape crisis centers and many other quasi-governmental agencies face ballooning pension costs on July 1. State leaders worry that inaction would strain the quasi-public agencies and lead to some bankruptcies, elimination of staff and loss of critical services for Kentuckians.

Asked Monday if he’s any closer to getting the support needed for his plan, Bevin replied: “I don’t get to decide where legislators’ heads are. They decide for themselves. If we don’t get this passed, there is going to be a lot of unnecessary pain and suffering among our regional universities and our health organizations and other quasis. That’s just the sad reality of it.”

Meanwhile, the chairmen of the House and Senate budget committees told reporters Monday that they have not been involved in tracking the vote counts.

“I’m really not sure where their vote tally lies because as we’ve made pretty clear, the governor had specific actions he wanted to see taken and so it’s up to his office to get and count the votes,” Republican Sen. Chris McDaniel said.

Republican Rep. Steven Rudy said he doesn’t know the status of Bevin’s plan with the House but if the governor calls lawmakers into a special session, “we’ll show up and do our job.”

Both said they recognize the financial pressures faced by the regional universities and quasi-agencies due to sharply rising pension costs.

“It’s got to get fixed, for the fiscal health of the commonwealth and for the health of these agencies that we count on to provide so many of these services,” McDaniel said.