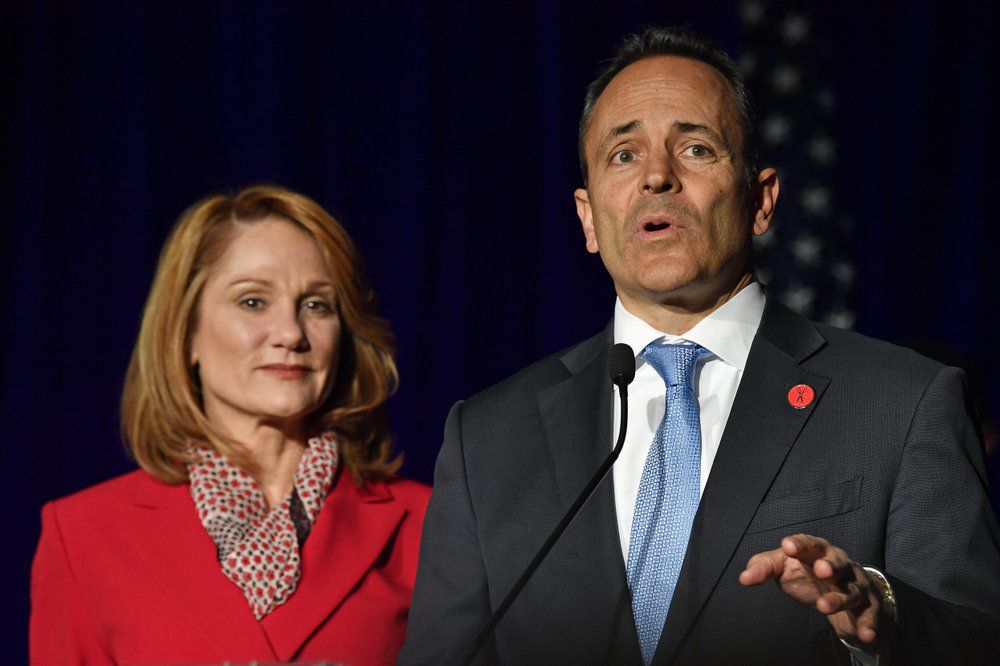 Kentucky Gov. Matt Bevin, right, and his wife, Glenna, speak to supporters gathered at a Republican Party event in Louisville, Ky., Tuesday, Nov. 5, 2019. Bevin did not concede the race to his opponent, electing to “wait and see what happens.” (AP Photo/Timothy D. Easley)

“It’s good. It’s healthy for this process to take place,” Bevin said during a news conference at the governor’s mansion Wednesday evening. “We want to ensure, above all else, that the integrity of the process is a good one.”

The request was accompanied by a signed letter to Secretary of State Alison Lundergan Grimes. Grimes’ office said the recanvass will take place on Nov. 14. A recanvass requires the Boards of Elections across the state to look at each voting machine and make sure all vote totals were added correctly.

In his news conference, Bevin didn’t take questions but explained why he’s requesting the recanvass.

“Kentucky, sadly — and it’s not unique to Kentucky — but there’s more than a little bit of history of vote fraud in our state,” he said.

“We know there have been thousands of absentee ballots that were illegally counted, that is known,” Bevin said. “We know there are reports of people having been turned away, incorrectly turned away, from various voting booths around the state.”

Bevin even accused the Grimes, a Democrat, of “suspect” behavior.

“And this is from a woman who, with all due respect to her, is not exactly rock solid as it comes to following the letter of the law,” Bevin said.

The request for a recanvass came hours after Beshear held a news conference saying he is the Kentucky governor-elect, and he’s ready to get started.

At his first post-election news conference at the Muhammad Ali Center, the projected winner of the governor’s race says his main message is the election is over and it’s time to move on. Final vote counts on election night show Beshear with 5,086 votes more than Bevin.

Beshear said Wednesday is the first day of the transition, and he’s getting to work regardless of whether Bevin concedes.

“Last night, the election ended,” Beshear said. “It ended, and it’s time to move forward with a smooth transition that we are here to do so that we can do the people’s business.”

Appearing with a group of Kentucky educators in red shirts, Beshear announced Deputy Attorney General J. Michael Brown as his transition chair. He said more announcements are coming soon, and he vowed to include people from all parties as he forms his cabinet.

Beshear said now is the time to come together and get to work. He said his first challenges are public education, health care, jobs, infrastructure and to change the tone in Frankfort.

“We can disagree without being disagreeable,” he said. “We respect everyone regardless of what party they are in.”

Beshear said he will be ready in January as the General Assembly reconvenes.

“We are going to make sure we are ready for the day we are inaugurated, for the first session and with the budget,” he said.

He promises to move quickly on the Medicaid waiver, a new board of education and restoring voting rights for 140,000 non-violent felons. Beshear also talked about making sure Kentucky can provide affordable health care and reducing the price of pharmaceuticals for consumers, and he promised to focus on insulin prices.

As of Wednesday morning, Beshear said he has not heard from Bevin but is ready to start working toward December when he is sworn into office. Wednesday night, Bevin said he called Beshear but got his voicemail.

After a long election run, Beshear said he plans to spend time with his kids, whom he said “deserve to see their dad.”