Bevin to Stump for Gillespie in Virginia Gubernatorial Race

by THE ASSOCIATED PRESS – 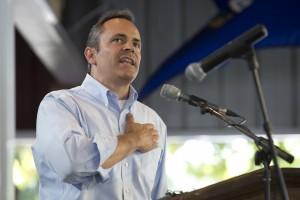 Gillespie’s campaign said Tuesday that the two will campaign together in Lynchburg and Staunton on February 9.

Bevin joins a growing list of current and former GOP governors supporting Gillespie. The former chairman of the Republican National Committee is the party establishment’s favorite in a four-way GOP primary contest.

The governor’s race in Virginia is among the most closely watched contests in the country this year.

Liberal groups have vowed to make it a referendum on President Donald Trump’s first year in office.