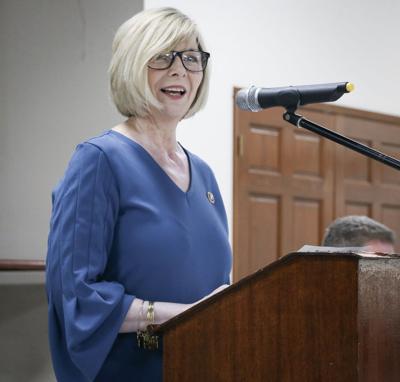 ASHLAND Rep. Terri Branham Clark, D-Ashland, on Monday gave Ashland Rotarians an overview of bills she supported in the past legislative session.

“Each piece of legislation that I voted on this year, I studied it, I contemplated it and I really considered how it would impact our individuals and our businesses,” said Branham Clark. “I tried to look for the best possible solution.”

She said House Bill 354 was passed, which corrected the unintended sales tax on local nonprofits. Starting on July 1 of last year, each nonprofit organization had to begin collecting a 6 percent sales tax on admission to events under the state’s sales tax expansion, which was part of the state’s tax reform bill that was passed by the 2018 Kentucky General Assembly.

Branham Clark said a school safety bill was also passed that encourages a collaboration between local law enforcement agencies to work on adding school resource officers into public school systems to provide safer environments for students. She noted there was a component of the bill that allowed for mental health care professional cooperation in the school systems as well that was removed somewhere in the negotiation process. She said she hopes it will be revisited again in the 2020 budget year, pointing out mental health care professionals are needed in order to really address school safety.

“Yes, we have to protect our children while they’re there but we also have to work on the underlying issues that are leading to problems,” she said.

Branham Clark also said funding of education and the pension system will be the biggest issues to address in the 2020 session. She said the Kentucky public school system is operating on a budget from 2008, noting it is vital to properly fund it.

“If we do not reinvest our dollars into our public schools we will collapse. That has to be our focus,” she said.

When it comes to addressing the state’s pension issues Branham Clark said the only options are to tax or create revenue, pointing out there have been bills proposed to do both. She said a comprehensive tax reform needs to be done, explaining it needs to be a complete overhaul comprehensive plan.

“I am not anti-business, I’m pro-worker,” she said about her thoughts on the issue. “I think the two have to marry and they have to coexist and work well together for both to thrive. So we’ve got to work hard to find that balance that supports both.”