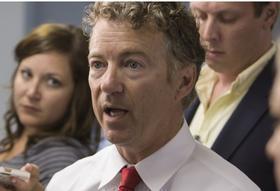 Kentucky’s Junior U.S. Senator has attracted some competition, among both Democrats and Republicans, as he tries to hold on to his seat.

While seeking the Republican nomination for president, Rand Paul is also working to win a second term in the U.S. Senate.  According to the Secretary of State’s Office, five candidates have filed to challenge Paul.

To win re-election, Paul will have to get through a Republican primary with candidates James Gould and Stephen Slaughter.  Gould is a financial analyst in Lexington and Slaughter is a Louisville engineer.

On the Democratic side are candidates Jeff Kender, Tom Recktenwald, and Grant Short.  Kender is a manufacturing worker from Phelps, Kentucky.  Recktenwald is a retired union officer at the Naval Ordnance in Louisville.  Short is a pilot and small business owner from Owensboro.

Candidates have until January 26th to file for office.