Gov. Matt Bevin says “hundreds of thousands” of able-bodied adult Kentuckians on Medicaid should be working but choose not to. But when his new Medicaid “community engagement” rules were set to kick in last July, only about 48,000 people on the program were short of meeting the requirements, according to a study of Medicaid records and a random-sample survey of people on the program.

Bevin made his assertion at a July 12 Kentucky Chamber of Commerce meeting in Louisville while promoting his new Medicaid plan, which, among other things, requires “able-bodied” adults on Medicaid who are not primary caretakers to work, attend school, take job training, search for a job or volunteer 80 hours a month, if they don’t qualify for an exemption or are in drug treatment. 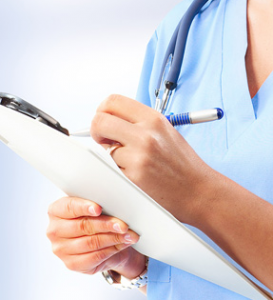 The plan, called Kentucky HEALTH, for Helping to Engage and Achieve Long Term Health, was set to start July 1, 2018. Two days before that, and again on April 1, it was blocked by U.S. District Judge James Boasberg of Washington, D.C. He ruled that federal officials failed to show how the requirements would serve the objective of the 1965 Medicaid Act, to provide people with medical coverage. He also struck down a similar plan in Arkansas. The administration of President Donald Trump has appealed the ruling.

The study was done by health researchers at the University of Pennsylvania, whom the state and the Centers for Medicare & Medicaid Services hired to evaluate Kentucky HEALTH if it takes effect. Kristi Putnam, deputy secretary of the state Cabinet for Health and Family Services, said the study was not commissioned by the cabinet, but was done under an agreement in the contract that allows the university to conduct its own research. The study was published in the Journal of the American Medical Association, meaning it underwent review by other experts before publication.

Putnam said the report does not refute the governor’s assertion that there are hundreds of thousands of people on Medicaid that should be going to work, but choose not to.

“I would disagree with that on a universal basis,” she said. “I think you have to consider the whole picture of those who are not employed in Kentucky, and not just the ones who are not meeting [the requirements for] benefits programs that are at this point theoretical programs. I think you have to take it as a whole.”

She added, “We still believe that there are those hundreds of thousands of people,” but the way the study represents those individuals “is a little bit difficult to see.”

The researchers found that when the program was first set to roll out 13 months ago, 330,075 of the nearly 1.4 million Kentuckians on Medicaid would have been required to participate in Kentucky HEALTH in some way: work or other community engagement; reporting of engagement activities; paying income-based premiums; and earning credits to get free dental and vision care.

Of this group, 132,790, or nearly 40 percent, would have been required to meet the community engagement requirements (the only part of the program that the study evaluated). Most of the 132,790 people were already in compliance; 25,422 were excluded because they were medically frail, 57,981 were working the required 80 hours a month; 727 were volunteering that much; and 235 were doing a sufficient combination of work and volunteering.

The study excluded 101,502 Medicaid beneficiaries who are on the Supplemental Nutrition Assistance Program (formerly known as food stamps) or the Temporary Assistance for Needy Families program, formerly Aid to Families with Dependent Children, or “welfare.”

Putnam, the deputy health secretary, said they should be included in the workforce numbers as not working because many are unemployed, under-employed, are medically frail for only a limited amount of time, or could be participating in the job market “at a higher level” than they are now.

“I recognize that the governor’s statement was not [about] underemployment, but that is part of the group that we are trying to help through this,” she said.

She said the number the cabinet typically uses to represent how many able-bodied individuals on Medicaid could be working is between 150,000 and 200,000, a number that she said varies because tens of thousands of people move in and out of the program each month.

When Bevin used the phrase “hundreds of thousands,” his office told Kentucky Health News that the figure came from the Census Bureau’s 2017 American Community Survey, a poll that estimated 443,723 Kentuckians “do not have a disability and are not in the labor force.”

Dustin Pugel, a policy analyst at the liberal-leaning Kentucky Center for Economic Policy, pointed out that only 136,400 of the 443,723 people Bevin’s office cited were eligible for Medicaid, had insurance, were not disabled and were not in the labor force.

“It becomes pretty clear that we are not talking about 443,000 sitting on their couches,” he said.

He said the census poll shows that of the 136,400 Medicaid-eligibles who are not in the workforce, 57,800 had related children in their home; 24,600 were enrolled in school; 6,100 received retirement income; 19,000 received Medicare, which means they did not self-attest to a disability, but had a health condition that qualified them for Medicare coverage as a non-senior. He noted that the numbers are estimates rounded to the nearest hundred and have large error margins.

“The point is that there are far fewer than 443,000 Kentuckians covered by Medicaid who are not working, and of those who are covered by Medicaid but outside the labor force, many have good reason to be,” he said. “To assume that all of them could or should turn around and ‘go get a job’ is wrong headed.”

The study surveyed a random sample of 9,936 people who would be subject to the new requirements. That produced estimates of the well-being of the 48,427 who were not meeting the community-engagement requirements: 27% reported fair or poor physical health; 25% reported fair or poor mental health; 33% reported that a health condition limited their activities in the previous 30 days;  60% needed medical care in the last six months; 27% went to a hospital emergency department in the last six months; and 17.5% were working, but less than 80 hours a month.

Pugel and Jason Dunn, policy analyst with Kentucky Voices of Health, said the study confirms what other studies have found, but is stronger because it used the survey and Medicaid claims during 2018.

“These studies all seem to come up with the same results,” Dunn said. “People are either already working . . .  and then the rest are providing care-taking for an ill or disabled relative or a child, or they are in school full time. There are just very few that meet that narrow population of not doing something, and we don’t know why.”

Pugel said, “We don’t know what those folks situations are, we only know that they are not currently meeting the requirement as it is written.”

Bevin and other advocates of the requirements have argued that free medical care discourages people from seeking work because they might lose their eligibility.

Dunn said the study “shows that the work reporting requirement is simply not necessary. That’s the main point that we’ve been trying to get across, that requiring this level of activity for the sake of eligibility is not necessary. . . . It is ultimately going to harm people in the long run by denying them access to care.”

The study also found that between 10% and 20% of those subject to the new rules may need to report hours through other means, like phone or mail, since they did not have access to the internet.

It found that the proportion of Medicaid enrollees that were required to meet the community engagement reporting requirement didn’t vary by geographic area, despite large differences in economic opportunities across the Kentucky workforce areas.

The Green River region in Western Kentucky, which includes Owensboro, and Kentuckiana Works, which includes Louisville, stood out in the 10 local workforce areas because about 20% of those who would be required to report community engagement hours did not meet the proposed requirements. The rest of the state ranged from 12.6% to 15.6% for this measure.