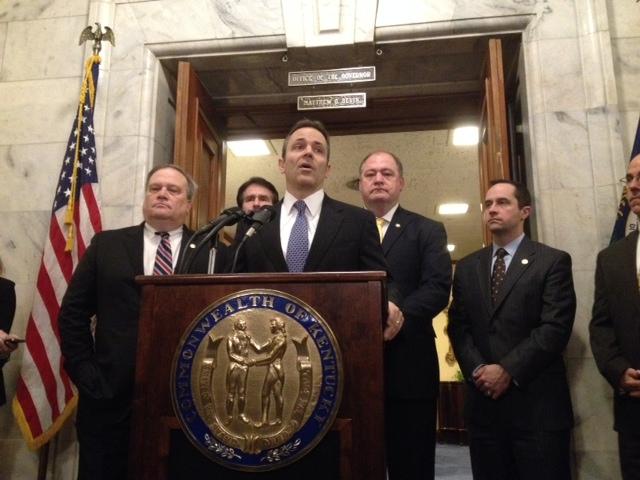 Republican Governor Matt Bevin and GOP legislative leaders held a news conference Tuesday morning to address the state budget standoff. Bevin said House democrats are unwilling to compromise on the spending plan. He maintained that all parts of the budget are up for negotiating.  “We are here, we are in session,” Bevin said.  “We will be here at any hour, on any day for the next two weeks to meet at any time to talk about this issue.”

During the opening of Tuesday’s budget conference committee meeting, democratic House Speaker Greg Stumbo asked if the governor had a compromise.  Stumbo said he met with Bevin once during the current session, but he says their talk focused on the election. The governor, however, said that he and the House leader have discussed the state budget.

On Monday night Governor Bevin released a video to address the budget impasse. At the beginning of Tuesday’s Budget Conference Committee meeting, House Budget Committee Chair, democrat Rick Rand, addressed the video.  “We did see the governor’s video message in front of Lincoln Statue and the press conference this morning,” Rand said. “And we took that to heart. So we did bring a compromise today since we don’t have one to consider from the governor.”

Republican Senate President Robert Stivers says he’s not willing to work beyond the last scheduled date of the legislative session, which is April 12.  By law, the legislature can meet until April 15.