Workforce development and transportation were two of the key issues on the minds of the Boone, Campbell and Kenton County Judges/Executive at the Northern Kentucky Chamber of Commerce September Eggs ‘N Issues. 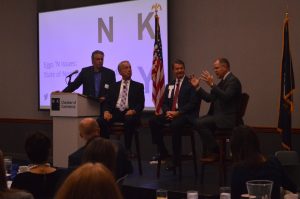 Both Moore and Pendery began their statements touting recent successes of the region.

“When have things ever been better in Northern Kentucky than they are right now?” Pendery asked.

He offered the region’s low unemployment and high workforce participation rates as examples, saying that Northern Kentucky works more than any other area of the state, and its rates are even better than the national averages.

He did take the time to joke that controversy is brewing in Campbell County, as there are people who think he’s been around too long — Pendery is facing two challengers in November’s election.

“My campaign would prefer to put it this way, ‘Human perfection approaches middle age,’” Pendery said, gaining a lot of laughs from the room. “Have we lost brain cells along the way? Yes, but now they’re down to a manageable number.” 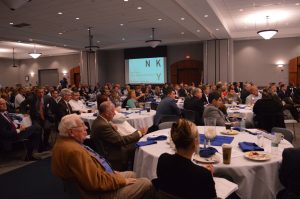 About 280 people listen to the remarks of the judges executive as they give their annual State of Northern Kentucky Address.

Moore, who won his re-election bid in the primaries, focused on economic development as well, citing that in the last 10 years, more than 150 companies have brought about 16,000 employees and $3.6 billion in investments into Boone County.

“It’s up to us now to implement, to plan, to build the infrastructure,” Moore said. “It’s important that we get this right. We want to make sure that this growth and this dynamic element that’s happening here adds to our quality of life, and that it doesn’t take away from it.”

The solution: partnership and teamwork, according to Moore.

“I can tell you we probably have the best leadership group in Kenton County, across the board, in the history of our county,” he said.

While acknowledging that there is a great team in place and good work being done, Knochelmann delved right into the issues he sees facing the community — housing, and mental illness and addiction.

“There’s a lot of things that are phenomenal, but we also have to be wary and realize that we’ve got those opportunities to improve,” Knochelmann said.

The three judges/executive also stressed pension reform as a major topic in the upcoming legislative session in Frankfort.

The whole bundle of issues that goes with pension reform — taxes, internal equity, etc. — needs a lot of work, and according to Pendery, it is the number one threat on the horizon.

“The state plan is what’s really driving most of the other plans down, but the CERS plan, which cities, counties, and some other employees are a part of, is one of the best funded programs around,” Moore said. “So if they don’t fix the plan comprehensively, we would like to see separation, where we can fend for ourselves. Cities and counties have always fulfilled their obligation.”

Knochelmann said, in addition to taking on pension reform, he’s looking forward to arguing for more funding for the county’s road projects and continuing to work with the Economic Development Cabinet.

“Without jobs, without job creation, we’re doomed. We have to grow,” Knochelmann said. “Getting the state’s support to bring jobs to Boone, Kenton, and Campbell, and making sure they’re good jobs, that’s what I’ll be arguing.”

In addition to making sure there are good quality career opportunities in Northern Kentucky, Moore talked about a quantity issue, as well.

“Where are the workers going to come from?” Moore asked. “Where are they going to live? Affordable housing is something we’re going to need to talk about moving forward, and of course, mass transit.”

There are huge groups of individuals in Northern Kentucky who are not employed, and it’s not just because of addiction and mental illness, according to Knochelmann.

“It has to do with subsidies from the state that are presently locked in, federal subsidies, etc. and wages. All that stuff we have to be willing to talk about,” Knochelmann said. “It’s going to take some exhaustive conversation. It’s going to wear us out. We’re going to get somebody mad. We’re going to offend somebody, but we’ve got to get over that.

“If we’re going to really compete like I know Northern Kentucky can over the next 5 to 10 years for employment, we’re going to have to do a lot of things differently.”

In response to a question from the audience, the judges/executive talked about work on the Brent Spence Bridge and an Eastern Bypass and all acknowledging that the bridge is of the higher priority.

Still, according to Moore, a major Brent Spence Bridge update is likely to fall into a six to eight year time frame.

As a team, the three judges executive also announced they’re going after a $25 million federal grant that would fund a cross-county route stretching from I-75 over to Campbell County. A decision for that is expected in December.

The next Northern Kentucky Chamber of Commerce Eggs N’ Issues is October 16. It will be a discussion of “River, Road & Air — A Lesson in Logistics.” For more information on Eggs N’ Issues, click here.