Arnold Simpson was born April 26, 1952, the son of James and Zona Pennington Simpson. Mr. Simpson graduated from Kentucky State University in 1974, and the University of Kentucky College of Law in 1977. He married Jo Ann Hill on October 10, 1981. He is a lifelong resident of Covington and a graduate of Holmes High School. 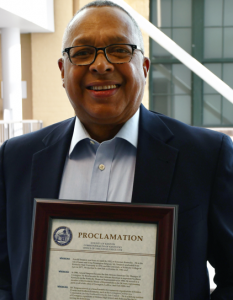 In 1986, Arnold Simpson became the first African-American City Manager of Covington. He then became the first African-American to represent Northern Kentucky in the Kentucky House of Representatives in 1994. He served as a member of the Kentucky House of Representatives for 24 years, representing parts or all of the cities of Covington, Ludlow, and Park Hills.

In addition to an accomplished legislative career, Mr. Simpson served as a board member for numerous organizations in Kenton County and Northern Kentucky.

A committee, composed of the members of the Kenton County Ethics Commission, reviewed the nominations, identified five deserving individuals, and forwarded their names to the Kenton County Fiscal Court for consideration and approval.