The dire shape of highway project funding in Kentucky, as well as work zone safety, were among the topics discussed before the General Assembly’s Interim Joint Transportation Committee Tuesday.

“We do have a funding crisis for transportation in Kentucky,” Chad LaRue, executive director of the Kentucky Association of Highway Contractors, told the committee.

“COVID-19 has certainly had a major impact,” he said. “We saw a $74.6 million drop in overall state road funding in 2020, compared with 2019. $32 million of that is from a drop in the motor fuels tax, which is the largest component of the transportation funding mechanism.” 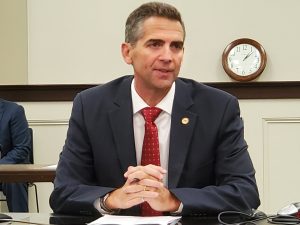 Chad LaRue said there is a funding crisis for transportation in Kentucky. (Photo by Tom Latek, Kentucky Today)

LaRue said the drop also affects city and county road needs. “That’s because 26 percent of the motor fuels tax revenue goes directly to them for that purpose.”

He said while there have been some drops since around 2014, the road fund difference is very apparent for the 2020 and 2021 fiscal years. “In 2020, we are projecting to be at about $450 million in letting levels. Over the prior 10-12 years, they were somewhere around $1 billion on average, per year.”

LaRue said funding is at a historic low. “We are likely going to end up at a level in 2020 that approaches the total we were putting down in 1960. We’re going to be putting down at a level we were at 60 years ago, something many in this room have not seen in their lifetime.”

Committee co-chair Rep. Ken Upchurch, R-Monticello, agreed with LaRue, saying, “We’re in trouble. This has been coming on for several years, like pension issues, where we keep kicking the can down the road, and never can seem to get across the finish line. This is one of those issues that if we continue down this path, I think we’re going to be in a similar situation.”

Upchurch said he is going to call on Gov. Andy Beshear to take the lead “because I think we are going to have to have executive branch leadership on this issue. We hope they are willing to put some skin in the game, I guess you could say.”

On another topic, Transportation Secretary Jim Gray told the panel work zone safety is the highest priority, not only for the workers, but for the driving public as well.

“Some of you may recall that just three weeks ago on September 29, there was a fatality in a work zone on the Mountain Parkway,” Gray said. ”The victim was a 30-year-old man with four children. He was part of a contractor crew that was installing guardrails. A vehicle crashed into the equipment and this young man was killed.”

He said they want to do all they can to prevent this type of tragedy.

Gray said: “Most of those killed in work zone crashes are not the workers, but the drivers and passengers who crashed in our work zones.”

Jason Siwula of the Transportation Cabinet said work zone crashes increased over the past year. “In 2019, there were eight work zone deaths, which were five more than in 2018. The number of documented work zone crashes also rose, approximately 20 percent, from 1,042 in 2018 to 1,251 in 2019.”

Siwula says one experiment they are doing in an effort to cut down on such crashes, involves orange pavement markings in two work zones on I-75 in Corbin and London. “We’re working with those orange stripes to help motorists understand when they are in a work zone, that there is less confusion about whether or not they are still in a work zone.”

He also noted that driver inattention, and distractions such as cell phones are big factors leading to work zone crashes. The cabinet is using public service campaigns to educate the driving public.