Kentucky now less than 780,000 injections away from goal of 2.5 million vaccinations to lift restrictions

The number of new COVID-19 cases on Kentucky fell on Sunday, as did deaths, hospitalizations, and the state’s positivity rate.

There were 325 new cases reported to state public health officials, continuing a three-day slide that began on Friday. Although some labs are closed or do not report test results over the weekend, there has now been a 13.99% decrease in weekly cases compared to the prior week, according to the governor’s office. The total number of positive cases in Kentucky since the pandemic began, now stands at 440,955.

There were four new deaths on Sunday, plus nine more from the ongoing audit of death certificates from last fall and winter, a significant drop from the 33 reported on Saturday and 22 on Friday from both sources. This means 6,449 Kentuckians have been lost due to the coronavirus.

Information on the location and ages of the latest victims was not available.

Kentucky’s positivity rate is currently 3.18%, based on a seven-day rolling average of tests performed versus positive cases. The positivity rate has now declined for seven days in a row.

There are now 1,723,624 Kentuckians who have received at least one dose of Moderna and Pfizer vaccines, which require two; or the one dose Johnson & Johnson vaccine. That means Kentucky is now less than 780,000 injections away from reaching the 2.5 million mark, at which time the governor says he will lift most of the capacity and other restrictions on businesses and venues for up to 1,000 people. 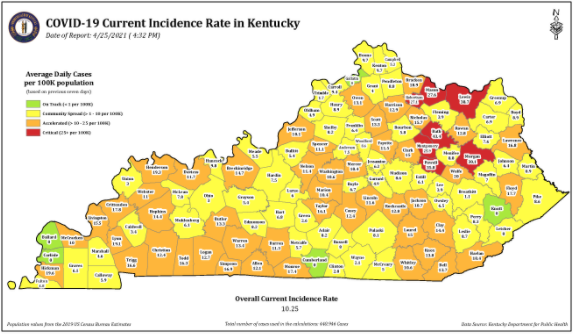