McConnell participates in inaugural activities, turns leadership over to Schumer – and has this to say. . .

U.S. Senate Republican Leader Mitch McConnell (R-KY), who lost his Majority Leader post on Wednesday, participated in the inaugural ceremonies of Joseph Biden in the traditional roles expected of the leader of the Senate.

As the Senate later convened to take up confirmation duties for the new President’s cabinet and the leadership gavel passed to Sen. Chuck Schumer, McConnell also delivered the following remarks:

“Before the American people and the world, the peaceful transfer of power that has helped define our nation for more than 230 years was carried out.

“We swore in the 46th President and 49th Vice President of the United States. 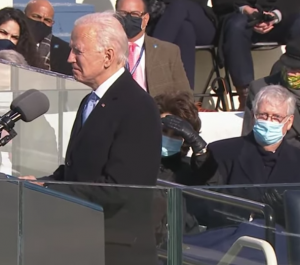 “President Biden and Vice President Harris are both alumni of the U.S. Senate. They are well known to us in this chamber.

“They begin their terms with both challenges and opportunities before them, and with the prayers of our whole nation at their backs.

“President Biden made unity the major theme of his inaugural address.

“He pledged to “be a president for all Americans”; to work as hard for the many millions of Americans who did not support his candidacy as he will for the millions who did.

“I congratulate my friend from Delaware and look forward to working with our new President wherever possible.

“Our country deserves for both sides, both parties, to find common ground for the common good everywhere that we can and disagree respectfully where we must.

“Last fall, the American people chose to elect a narrowly-divided House of Representatives, a fifty-fifty Senate, and a President who promised unity.

“The people intentionally entrusted both political sides with significant power to shape our nation’s direction.

“May we work together to honor that trust.

“Earlier today, I was honored to present our former colleague Vice President Harris with the flag that flew over her historic swearing-in as our nation’s very first woman Vice President.

“This groundbreaking achievement elicits national pride that transcends politics. All citizens can applaud the fact that this new three-word phrase – Madam Vice President – is now a part of our American lexicon.

“So once again, our sincere congratulations to our former colleague from California on this day.

“I also join my colleagues in warmly welcoming our three newest fellow Senators.

“Senator Padilla of California and Senators Ossoff and Warnock of Georgia have been sent to this chamber by their home states to represent their neighbors and serve our nation.

“We have plenty of Senate business to discuss at length in the days ahead. For now, I just want to congratulate each of our new colleagues. I look forward to working alongside them.”