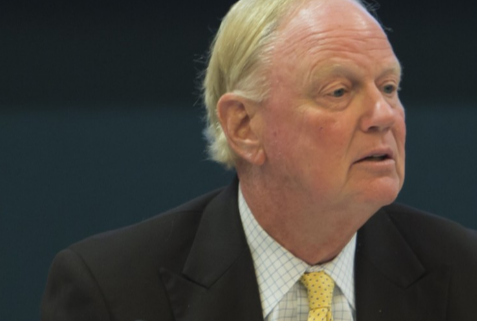 The email shows Ramsey’s computer was removed from the president’s office to “make room” for the acting president’s hardware on Aug. 16 of last year, almost three weeks after Ramsey was forced out.

The computer was prepped to be reassigned to another staffer by Sept. 12, according to a screenshot of an internal ticketing system for information technology requests.

The IT requests didn’t explicitly call for the computer to be erased. But forensic examiners would say months later that Ramsey’s hard drive was “erased and repurposed” before their work to unravel university finances began.

The school released the email Tuesday as part of a months-old public records request, but redacted information that would reveal who made or fulfilled the requests about Ramsey’s computer. By mid-September, the computer was “newly imaged” and available for another employee.

The erasure occurred amid widespread scrutiny, audits and leadership changes at U of L last summer. More recently, investigators from the Attorney General’s office have inquired about the computer amid an ongoing criminal probe.

“Kathleen had zero involvement in this, including zero contact with Ryan McDaniel about repurposing any IT equipment,” Oldfather said.

(Read KyCIR’s coverage of the University of Louisville)

In the email between McDaniel and the school’s chief operating officer, McDaniel attached a screenshot of the internal ticketing system for Ramsey’s computer. He said someone “from the meeting” requested a copy.

The person who asked university technicians to pick up Ramsey’s computer remains a secret, because the university’s records custodian redacted that information. The university also removed the details on which IT staffer completed the task as well as who received the repurposed computer.

Sherri Pawson, the university’s record custodian, said she redacted names in the document because of federal student privacy laws.

The hard drive’s erasure was first raised publicly in June, when a firm hired to conduct a forensic investigation of the University of Louisville Foundation said the highly sought data on Ramsey’s hard drive was lost to “substandard” information technology practices at the school.

One expert told the Kentucky Center for Investigative Reporting that a simple repurposing of a hard drive shouldn’t have prevented a forensic expert from accessing data on the hard drive.

University of Arkansas professor G. Stevenson Smith, who wrote a textbook on forensic accounting, said it’s very hard to truly hide data from a computer specialist — “unless you put the hard drive in a microwave.”

The hard drive came up again in July, when the state attorney general launched a criminal investigation into the foundation and asked for the hard drive.

KyCIR requested McDaniel’s emails pertaining to Ramsey and Smith from last summer, and the university didn’t initially respond to that request. The attorney general’s office found that U of L was in violation of the state’s open records law shortly after the school began turning over the documents. None of the 1,000-plus pages of emails provided by U of L mentioned Ramsey’s computer.

This week, the attorney general again found U of L in violation of open records law when it improperly withheld a specific email requested by the Courier-Journal. U of L released that email Tuesday.

Though the latest emails don’t shed much light on the computer’s erasure, they clarify the timeline of events in the chaotic weeks of Ramsey’s exit.

When Ramsey was forced out as president in late July, a state audit was already underway. The makeup of the board of trustees changed twice through the summer, and its members were working out the details and scope of a separate forensic audit that would focus on the University of Louisville Foundation, the school’s nonprofit fundraising arm.

Meanwhile, Ramsey remained at the helm of the foundation, where he had a separate contract. Renovations at his office in the Cardinal Station building continued through August as staffers scrambled to meet deadlines for installing audio-visual equipment and projectors.

That month, the foundation began hemorrhaging big donors. Two major foundations issued letters to U of L raising concerns about how their money was being spent and calling for a deeper investigation. The departure of Ramsey and Smith, his longtime chief of staff, appeared imminent.

In the midst of the upheaval, IT staffers began casting new scrutiny on Ramsey’s accounts and billing.

“I don’t want to show up in an audit as still hosting and paying for his stuff after he’s gone,” Jeff Rushton, then director of digital media, wrote in an email about one account in Ramsey’s name.

In mid-September, the week of Ramsey’s resignation from the foundation, the university cancelled Ramsey’s wife’s cell phone, various cable/internet accounts at foundation-owned houses and a phone number tied to the president’s residence.

The university transferred phone bills back to current staffers who no longer would receive company paid phones. An examination also showed U of L was still footing the bill for a phone and iPad for Vickie Yates Brown Glisson, the secretary of the Kentucky Cabinet for Health and Family Services since December 2015. She left her position at the University of Louisville Foundation in February 2016. The university transferred billing back to her.

On Sept. 27, McDaniel received an email from acting president Neville Pinto with instructions about preserving records, including hard drives. Two weeks had already passed since the computer was prepped to be given to another staffer, but the swap hadn’t been scheduled.

“Given the pending forensic audit that will be directed by the University, your role is critical,” Pinto said in the email. “Your obligation is to assist the University in preserving all relevant information.”

The next day, the IT department took Ramsey’s computer to that employee’s office and set it up.

Disclosures: In 2015, the University of Louisville, which for years has donated to Louisville Public Media, earmarked $3,000 to KyCIR as part of a larger LPM donation. University board member Sandra Frazier, former member Stephen Campbell and attorney Ann Oldfather have donated.