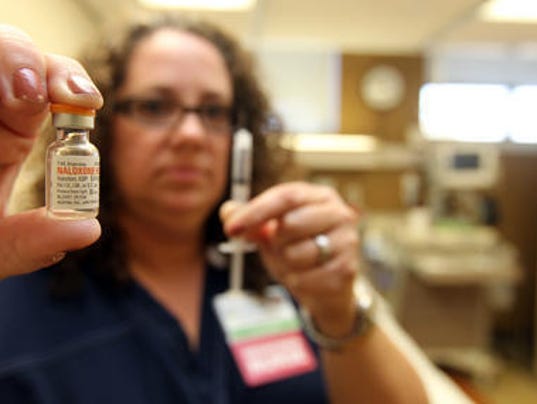 Emergency staff in Northern Kentucky reversed an average of six overdoses a day at St. Elizabeth hospitals since the start of the year. That compares to about three reversals on an average day in 2015 and 2016, a 100 percent increase.

To understand how dramatically overdoses have increased, consider that when the Northern Kentucky hospital system started counting overdose cases in 2011, there wasn’t even one every day.

St. Elizabeth on Wednesday released its overdose count for January, February and March, the first quarter of 2017. The total was 586 for heroin-related overdoses that users told healthcare workers about; prescription painkillers were not included. In March, the hospital network saved more people with the overdose reversal drug naloxone than it ever had in a month with the exception of one, September 2016, when the large-animal opioid carfentanil debuted on local streets.

Experts said the increase was primarily due to the presence of fentanyl, the powerful synthetic opiate often mixed with or substituted for heroin. More people also may be getting to the hospitals after an overdose because of the wider availability of naloxone, the overdose antidote.

“I have stated this multiple times, we are going lose an entire generation to opiate addiction,” said Ashel Kruetzkamp, nurse manager for St. Elizabeth Edgewood, who follows the numbers. St. E also has hospitals and emergency rooms in Covington, Florence, Fort Thomas and Williamstown.

“There are so many risks with not knowing what you are getting,” she said, listing heroin along with fentanyl and other synthetics. “And the dealers control the potency of the drug.”

Northern Kentucky, a largely suburban region with high use of prescription painkillers from 2000 to 2010 became a center for heroin that was recognized by some local doctors and law enforcement around 2011. By 2012, Kruetzkamp had made it a mission to count the overdose cases coming into her hospital system’s emergency departments.

Now, she says, some St. Elizabeth emergency overdose cases are repeat patients, but others seem to have just started using heroin. “We have repeat individuals who have overdosed more than once, some up to three times a month,” Kruetzkamp said.

Dr. Jeremy Engel, who started urging a community-wide response to a heroin epidemic in 2012, said the character of the public health crisis triggered by heroin is changing as the years go by.

He said there is no epidemiological study yet to show numbers of those starting and stopping heroin, those dying, those turning to more potent fentanyl analogs.

But Engel said, “I can say with confidence that while we don’t know what the using population is, we know that there is a group starting to use, a group stopping and going to treatment or to jail, and a group dying. There’s a combination of repeating populations.”

Engel treats opioid- and heroin-addicted patients in addition to working as a St. Elizabeth family physician. He sees people who are staying in treatment. He also knows of those who are becoming accustomed to fentanyl use – and are learning how to use fentanyl more safely. Long-term, he said, they are still at risk of death.

The hospitals are providing the Northern Kentucky Helpline, 859-415-9280 that is offered by the Addiction Services Council in the region. Workers have assisted with Casey’s Law petitions, which can lead to court-ordered treatment for unwilling adults. St. Elizabeth also gives naloxone kits to families and patients leaving the emergency department.