As a swollen Ohio River began to recede from its highest crest in 21 years, the damage from moderate flooding across the region began to emerge.

The water on the river peaked Monday and was expected to continue falling this week,  even though the National Weather Service sees more rain in the forecast as early Tuesday night.

“It will be more like normal rain amounts,” said Mike Crow, a weather service meteorologist, said of rain expected through Wednesday.

Rick Skees says he’d rather sleep in his truck with his two dogs near the water then stay with somewhere else while his home of 20 years is flooded by Ohio River in Utica, Indiana. Matt Stone, Courier Journal

In the days and weeks ahead, “there will be a tremendous cleanup for this community,” said Brian Bingham, director of operations for the Metropolitan Sewer District, which manages drainage and flood control in Louisville.

Officials said hundreds of Louisville homes were inundated following five days of rain that dropped 40 billion gallons of water on Louisville alone. That’s a huge amount of water – about the same volume the Louisville Water Co. produces in a year.

While damage estimates will not be fully calculated until the flood waters recede more, Mayor Greg Fischer said he believes there were “hundreds not thousands” of homes affected in the city. The river level should fall 10 feet by Saturday, though technically it will still be above flood stage.

Fischer said he had called on Kentucky Gov. Matt Bevin to include Louisville in any requests for federal relief.

In the southern Indiana town of Utica, hit especially hard, residents were relieved that the waters were starting to recede.

But Rick Skees said he expects he won’t be able to get inside his home for cleanup until Thursday. “There will be a lot of mud,” he said.  “The carpets will have to be torn out – all the walls, at least four foot, torn out so you don’t get mold.

“Living down here on the river, you have to expect it,” he said.

Workers were busy at Cunningham’s Creekside on River Road in Prospect as businesses and homeowners in that area prepare for flooding this week.Marty Pearl, Special to Courier Journal

Louisville has more than 12,000 homes in flood-prone areas and its flood storage basins – many built since the devasting 1997 flood – helped keep hundreds of homes dry, said Bingham. The problem isn’t just along the Ohio River; Saturday’s storms caused some of its tributaries to spill over their banks and brought about flash flooding in low-lying areas.

Monday, the third pump at one of MSD’s 16 Ohio River pumping stations was taken out of service because it was vibrating too much, Bingham said. Two other pumps failed during the height of their storm and rising waters.

Together, the pump stations moved 21.5 billion gallons from waterways like Beargrass and Pond creeks out of the city and into the Ohio River over five days ending Sunday. They are located along flood walls or levees and help drain the city while keeping the Ohio River at bay. They’re designed to keep homes and businesses from being deluged. 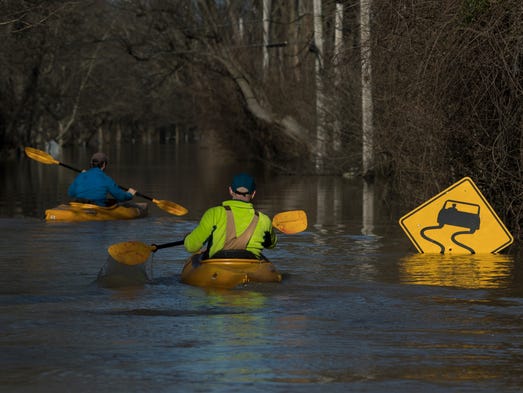 “From my perspective, this was handled well,” Fischer said. “You have to remember that there are multiple pumps at pumping stations.”

Still, Bingham told his board that when the rain was falling fastest and the Ohio River was still rising, some of the pump stations were losing ground. That means they were running at capacity but water levels behind them on the city side were still rising.

“These pump stations were not designed for the amount of rain we are getting,” Bingham said.

Nine are more than 65 years old – “museum quality and age,” according to Bingham – and were built in the decades after Louisville’s great flood of 1937, which covered two-thirds of the city.

At MSD it’s all hands on deck during rising waters and heavy rain. Even the agency’s top finance and legal officers staffed pump stations last week.

“When the pumps are operating water levels are rising, that will get your blood pressure up,” said Chad Collier, MSD’s finance director.

Here’s what the February 2018 flooding around Louisville and Southern Indiana looks like from a helicopter. Pat McDonogh/Louisville Courier Journal

Making matters worse with this flood were days of rain prior to Saturday’s cloudburst, resulting in saturated ground and soggy lawns, leaving runoff with no place to go.

Totals Wednesday through Sunday varied from between 3 and 4 inches to more than 8 inches across the region, according to MSD rain gauges.

“When you have that intense rain followed by more intense rain, there’s really just nowhere for it to go,” said Wes Snydor with MSD.

A monitor on the Middle Fork of Beargrass Creek illustrated the intensity of flash flooding as the rain came down in buckets Saturday night. In 24 hours, it jumped 15 feet and went back down, causing flooding on Interstate 64.

February’s total rainfall of 10.47 inches at Louisville International Airport through Monday also set a record that had stood for 134 years – the 9.84 inches that fell in Louisville during February 1884.

“Our system is operating as it is supposed to,” Bingham said. But he said rain events like last week “are bigger than the system is designed to handle.”

Building enough flood storage to handle all of that rain would cost many billions of dollars, he added.

In Louisville, retirees Ed and Dorothy Beavers found they couldn’t escape rising waters no matter where they live. 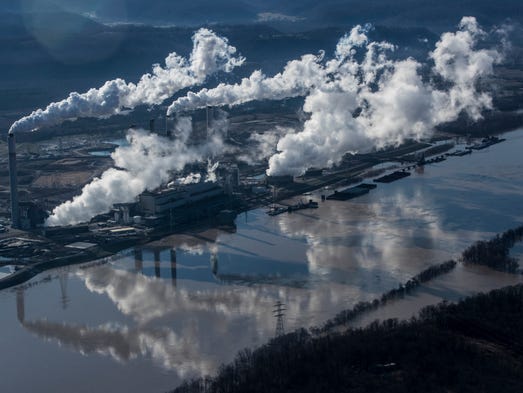 Steam billows from the Mill Creek Power Station in southwest Jefferson County as the swollen waters of the Ohio River encroach on the facility. Feb. 26, 2018  By Pat McDonogh / CJ
Two years ago, MSD bought their home on West Indian Trail after they experienced a seventh flood since 1997.

The Beavers left that floodplain area just east of the airport to what they thought was higher ground in the Camp Taylor neighborhood. They ended up ankle-high water in their finished basement.

“We’re thinking about building an ark and living in an ark so we can just float away,” said Dorothy Beavers.

Louisville Water Company employees are using boat transports to go to work at the water tower due to flooding. Sam Upshaw Jr.