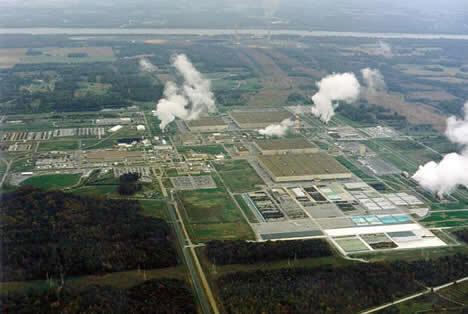 Kentucky’s ‘Atomic City’ cleared a hurdle this week with the U.S. Department of Energy to sell depleted uranium from a former enrichment plant to re-enrich at a future nearby facility. A one-billion dollar GE-Hitachi Global Laser Enrichment facility will re-enrich tails left in the cylinders at the Paducah Gaseous Diffusion Plant in McCracken County.

Paducah Mayor Gayle Kaler said the new facility “won’t happen right away” but the DOE agreement was a “big hurdle.” She said there is still a ways to go before breaking ground. With the announcement this week, she said the hope is that venture capitalists will want to invest in the company. She said “the big thing” is the likelihood that related industries will locate near the plant to be in close proximity.

“There’s companies that do the small modular reactors, SMRs, and they manufacture those. They can be manufactured there and be shipped out. That’s the new wave in nuclear energy,” she said.

Kaler said this is “a game changer for Paducah” in terms of what the city will look like in the next 20 years. The facility promises high wage jobs in engineering and technician work and numerous construction jobs along the way.

As for what’s next, Kaler said, “We still have to get the land transfer done because they want to build outside the fence in that fish and wildlife area. So we’re working with Secretary Snavely in Frankfort and the Governor. Senator Carroll’s working with that also. We’ve got to get over that hurdle next.”

The PGDP is situated within the 6,560 acre West Kentucky Wildlife Management Area in McCracken County.

After her tenure as mayor ends, Kaler said she will still chair the Paducah Area Community Reuse Organization (PACRO) and will be involved in the progress of this facility. She added that now Paducah’s Riverport Authority is a designated Foreign Trade Zone, along with shipping containers on barge and Paducah’s potential to be a larger distribution center – the new facility means renewed potential for a city that thrived in the Atomic Age and has taken a hit in the changing foreign trade economy in the 90s and with the closure of PGDP in the 2000s.