Evolent, which already provides services and staff for Passport, will purchase a 70% share of the nonprofit company for $70 million and invest additional funds to shore up Passport, which had been struggling financially since the state last year cut Medicaid rates for the Louisville region where it does most of its Medicaid business.

Evolent also hopes to revive Passport’s plan for a new headquarters in West Louisville, which was suspended in February as a cost-cutting move.

As part of the deal announced this week, Passport CEO Mark Carter will step down on June 7 and Scott Bowers, Evolent’s national Medicaid president, will become Passport CEO. Carter will remain on for a period as an adviser.

The company will continue to operate under the name Passport and the more than 300,000 Medicaid enrollees it serves should see no disruption in care, officials said.

Passport’s founding members and owners, including the University of Louisville, U of L Medical Center, Norton Healthcare and other local health concerns, have signed off on the deal and will remain 30% owners.

U of L President Neeli Bendapudi endorsed the deal in a statement Wednesday.

“The University of Louisville helped create Passport Health Plan in 1997, paving the way for what has become a national model for managed care,” Bendapudi said. “Now we are proud to partner with Evolent Health to begin a new chapter that will continue to spark innovation in the delivery of care.”

Evolent, a for-profit, publicly-traded firm based in Arlington, Virginia, already provided administrative services and about 470 of Passport’s 620 employees, through a business partnership that began in 2016. Evolent has about 3,600 employees nationwide.

The deal is subject to approval of state and federal regulatory authorities including the Securities and Exchange Commission, a process expected to take about 60 to 90 days.

Carter, in an interview, said he thinks it’s a good deal for Passport and the Medicaid enrollees it serves, the majority of whom live in the Louisville region where Passport was founded.

“I think this transaction puts Passport on a really solid foundation,” Carter said.

Passport had been concerned about a possible takeover of its business by the state Department of Insurance if it was unable to recover from the financial losses of the past year.

Bowers said his company, which focuses on strategies to improve health outcomes and cut costs, is well-positioned to take over a business focused on Medicaid patients.

Evolent was founded in 2011 and serves about 35 groups such as hospitals and physician practices, focusing mostly on government health plans: Medicaid for low-income and disabled individuals, and Medicare, for those over 65.

Passport was founded in 1997 as a pilot project to help the state control Medicaid costs in the Louisville region at the request of state officials.

Passport has the second largest share of the state’s Medicaid business and is the only one of the five companies that operates solely in Kentucky. 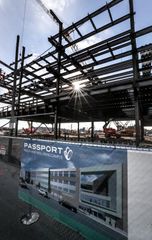 State officials insisted the new rates were developed with the aid of an independent actuary, an insurance rate expert, and were not aimed at any individual company.

But the rate cuts hit it disproportionately, Passport said, because the state cut Medicaid payments 4.1 percent in the Louisville region, the area it was founded to serve. Meanwhile, the state increased payments by 2.2 percent for the rest of the state where the other four health plans serve most of the other Medicaid enrollees.

Check out: Bevin meets with lawmakers about Passport after criticizing company

While the state recently enacted revised rates that effectively restored Passport to its original, higher rate, that’s not enough to make up for the about $100 million it lost since July 1, Carter said.

“It helped but it didn’t get us where we need to be,” Carter said.

Carter said the additional investment by Evolent should help restore financial solvency to the company.

Officials with Passport and Evolent also said they are committed to resuming work on the new headquarters Passport had under construction on West Broadway, a development celebrated by West Louisville for prospects of bringing new jobs and growth to the area.

Passport suspended construction on the $82 million complex at 18th and Broadway in February, citing financial problems it said were brought on by state Medicaid cuts.

The news prompted an outcry from city officials, West Louisville leaders and others who called it a blow to economic success of an area long starved for jobs and development.

Carter and Bowers said they are still in discussions about how to revive the stalled project but Evolent is committed to being a major tenant at the complex they hope to complete with the aid o an outside developer.

“We certainly are going to do all that we can to partner with all of the individuals in Louisville and really try to continue Passport’s vision of that West Louisville campus going forward,” Bowers said.