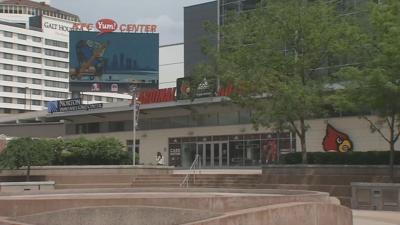 On a rainy night, with the Cardinals playing on the road, Lynda Salvatore watched from Molly Malone’s Irish Pub and Restaurant in St. Matthews.

“I think they’re good,” Salvatore said of the team. “I really like our coach. I like Chris Mack. I think he’s doing a good job.”

If the midweek match-up had been a home game, Salvatore might have been at KFC Yum! Center to watch. But right now, there’s a reason she’s worried her attendance there might shrink soon.

“I mean, you can’t go out anymore or do anything without being nickel and dimed to death,” she said.

Metro Council will soon consider a measure to tax KFC Yum! Center ticket sales for both games and concerts. The city’s on the hook to help pay off the arena with a $10.8 million payment each year. A proposed 10% tax on ticket sales might mean less of that payment has to come from the city’s general fund budget. Then, whatever’s saved could then be used to help the city avoid more cuts to public safety and other city services.

The plan also calls for a 0.25% tax on restaurants located in Louisville.

But not everyone is against the idea. Another diner said he didn’t think the average person would even notice the new taxes.

Metro Council President David James said he thinks the plan makes sense. Because of rising pension obligations, the city has already made a series of budget cuts and is looking for new revenue sources. However, options are severely limited, James said.

According to James, if the new tax saved the city’s budget $3 million, the city could use those savings to rehire more than 50 police officers, for instance.

Councilman Brent Ackerson is the sponsor of the idea.

“As a result of increased pension obligations, Louisville Metro Government has reduced services to the public and been forced to examine all revenue options allowed by state law to avoid further cutbacks,” Ackerson wrote in the ordinance.