“U.S. farm bankruptcies in September surged 24 percent to the highest since 2011 amid strains from President Donald Trump’s trade war with China and a year of wild weather,” Mike Dorning reports for Bloomberg.

“Growers are also becoming increasingly dependent on trade aid and other federal programs for income, figures showed in a report by the American Farm Bureau Federation, the nation’s largest general farm organization.”

“Nearly 40% of that income – some $33 billion in total – is related to trade assistance, disaster assistance, the farm bill and insurance indemnities and has yet to be fully received by farmers and ranchers,” says the report. 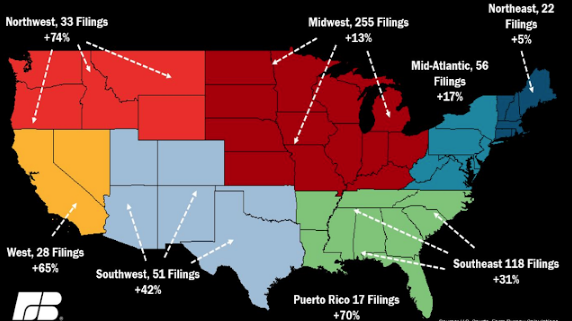 “Moreover, farm debt in 2019 is projected to be a record-high $416 billion, with $257 billion in real-estate debt and $159 billion in non-real-estate debt. The repayment terms on this debt, according to data from the Kansas City Federal Reserve, reached all-time highs for a variety of categories.”

In short, the report says, farmers are taking longer to pay off their debt. With such record-high debt, it’s unsurprising that Chapter 12 farm bankruptcies remain high.