FRANKFORT, Ky. (KT) – A Republican lawmaker from Louisville is proposing legislation for the 2020 General Assembly that would legalize medical marijuana in Kentucky.

Rep. Jason Nemes, whose district includes parts of eastern Jefferson County and Oldham County, introduced similar legislation during the 2019 session, which had 53 bipartisan co-sponsors. It won near-unanimous passage in the Judiciary Committee with only one “no” vote, however, it was never called for a floor vote.

The reason for proposing the bill is simple.

“It’s time in Kentucky for people who will be helped by medical marijuana to have access to it,” he said.  Nemes says the bill is similar to last year’s measure. “It allows physicians if they think their patients will benefit from medical marijuana, to make a recommendation to the patient so they can get it. No one can get it without a bona fide relationship with a physician, an ongoing relationship with that same physician.” 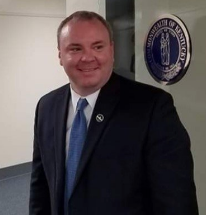 He notes the measure sets up a lot of licensing regulations for how it’s grown, produced and dispensed.

“The bottom line is the overwhelming majority of Americans have access to medical marijuana, and it’s time Kentucky joins that group.”

Nemes says people have spoken to him about how medical marijuana helps them or how it could help them.

“A number of people have come to me who have no criminal background, just want to feel better and be better. They have admitted to me, their representative, that they commit, effective, felonies, either for themselves or their children.”

The group ProCon.org says 33 states have legalized medical marijuana, while 11 allow recreational use of the drug.

He said he has spoken with numerous physicians and done a lot of research on the subject, and found it helps people.

“It’s not a panacea for the world’s ills, it doesn’t solve everything, but it does help a lot of things. If a physician thinks it will help his or her patient, the legislators need to get out of the way and let the doctors do their job.”

He says in addition to 53 co-sponsors this past session, they also had 65 committed votes in favor of the measure.

“This is a bill that, if it gets a vote on the House floor, it will pass.”

When asked why he didn’t push for a vote this past year, Nemes replied, “We asked for a vote, we just didn’t get one. So, we’re going to ask again and again and again until we get one. Once it comes to the floor, it won’t just pass with 51 or 52, it will pass with an overwhelming constitutional majority of well over 60 votes.”

He says there is overwhelming support for the issue among Kentuckians of all ages and political background, adding, “It’s unquestionable that medical marijuana is good to help us reduce our opioid addiction rates. That is from a University of Kentucky physician who published in The Journal of the American Medical Association. That’s as legitimate of a publication that you can find. What she found was that in states that have medical marijuana, the Medicaid prescription rates for opioids go down eight percent. That tells us that when physicians have another option, they choose it.”

He says data also show an eight to 24 percent reduction in overdose rates, and that the Multiple Sclerosis Foundation endorsed his bill this past year, was well as the Epilepsy Foundation.   Nemes emphasized doctors should be able to treat patients as they see fit.

“I’m a lawyer, I sue and I defend people for a living,” he said. “I don’t treat people, so why am I and my colleagues standing in the way of allowing physicians to practice medicine? It’s not appropriate. Let’s get out of the way and let doctors do their job. Let doctors decide.”

Some people have said taxing medical marijuana could help the state’s financial woes, such as the public pension system. Nemes says he opposes that.

“Taxing it is cruel. We don’t tax medicine in Kentucky. We’ve made that decision decades ago and this bill honors that decision. I would vote against the bill if it would be taxed. You would be making money on the back of sick people and that’s not appropriate.”