Sen. Paul speaks on his “penny plan” in Pike County

PIKE COUNTY, Ky. (WBKO/WYMT) — Senator Rand Paul continues his tour of Kentucky, stopping in Pike County and sharing his thoughts on how his economic plans for the nations could have an effect in Kentucky.

Paul said his “penny plan” would give Kentucky more money to pay for improved schools and infrastructure.

“Basically, what we do is we take all the spending in the federal government,” Paul said. “We tell all the programs they have to cut by one percent.” 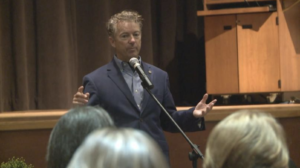 The senator also said the money saved by cutting the budget would go towards things Democrats and Republicans can agree on.