Thousands of Jefferson County students went to classes this year without their schools ever knowing if they were vaccinated against measles or other highly contagious diseases.

A Courier Journal analysis of vaccination reports found that more than 4,300 students attending Jefferson County Public Schools had no record as of March that they received their shots for measles, mumps and rubella.

That’s despite a state law requiring students to hand in those records within two weeks of enrollment.

District officials say some simply may have not turned over their documents despite schools’ reminders. In addition, roughly 500 JCPS students have medical or religious exemptions, as the law allows.

But it’s those who haven’t been vaccinated that have officials worried.

“We’re putting immuno-compromised children, children too young to get immunized — and pregnant teachers and pregnant moms at risk,” Troi Cunningham, an immunization nurse with the state, said about low immunization rates in some areas.

In more than 40% of Jefferson County’s public elementary schools, measles immunization rates fall below the level that epidemiologists say is adequate to prevent an outbreak, leaving them vulnerable to the spread of disease.

Public health officials say about 95% of students need to be fully immunized in order to protect vulnerable kids from measles.

Records show that in one JCPS school, only 57% of kindergartners were recorded as having had the required measles-mumps-rubella vaccine as of March.

The low numbers at some schools are troubling as record numbers of potentially deadly measles cases crop up across the United States — including two recent cases in Kentucky.

It’s not just measles: Jefferson County data shows that some schools are also missing student immunization records for other diseases, including chickenpox.

And the number of students who have records for the newly mandated hepatitis A vaccine is even lower.

JCPS struggles to get some vaccination records

Some schools say the low numbers are simply an issue of getting parents to hand in the paperwork documenting their children’s vaccinations.

But district officials acknowledge there is a struggle to get some kids vaccinated.

There’s an “underlying problem of inconsistent immunization access for students and families across the community,” JCPS spokeswoman Jennifer Brislin said.

JCPS this month held a pilot vaccine clinic at one of its schools and hopes to offer more next school year. And Brislin said schools and the district “continuously work” with parents to try to get documentation of immunizations. 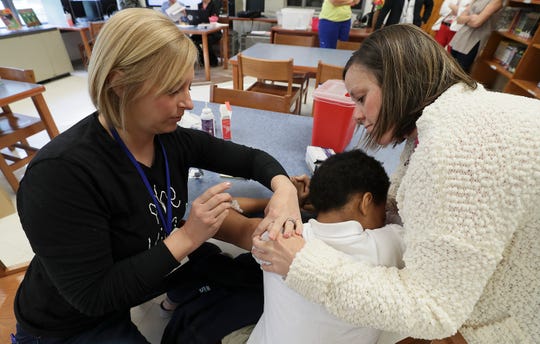 But schools also face a dilemma when so many children show up without the required immunizations.

“What do we do when a child is not vaccinated? Where do they go?” said Dr. Ruth Carrico, an infectious diseases expert at the University of Louisville. “If they get sent home, they miss out on education. If we don’t send them home, they may not realize we really mean it that you need that vaccination.”

Kentucky law requires immunization records to be on file within two weeks of a child attending school. But Cunningham said schools must enforce that, although local health departments are able to step in and put measures in place to control an outbreak.

The battle to get poorer kids vaccinated

Kentucky’s rate of MMR vaccinations is actually higher than the national average.

Data from the U.S. Centers for Disease Control and Prevention shows that 92.7% of Kentucky children aged 19 months to 35 months had at least one dose of the MMR vaccine in 2017, compared with 91.5% nationally.

But, as with many states, rates of vaccination tended to be lower among poorer residents.

Jefferson County data from both public and private schools showed the numbers of children skipping vaccinations for medical or religious exemptions were comparatively low.

That meant that schools with low vaccination rates tended to have significant numbers of children who lacked an exemption or documentation of vaccination, as required by law.

Eva Stone, district health coordinator for JCPS, said access to health care is a big barrier for some families.

She said there are few medical providers that give vaccines to children on Medicaid, meaning parents may have to take their children somewhere else, such as a local health department, to get their shots.

That can be difficult, especially for parents who can’t afford to take time off work or who have limited transportation options.

And she worries about which students aren’t seeing health care providers at all. She noted that vaccines aren’t the only health requirement that some students are missing.

Stone said about 85% of JCPS kindergartners turn in their required school physical forms. She said it’s even lower for sixth graders, at around 45% or 50%.

“This is a community issue,” Stone said. “How do we make sure children have access to health care?”

More education news: Is a girls school of color next for JCPS?

The advantages of herd immunity

Having a high percentage of school children vaccinated significantly reduces the risk of an outbreak, officials say. It’s a concept known as herd immunity, in which the immunity of a high number of people makes it unlikely that the disease will spread.

The idea is that vulnerable populations — such as newborns or those with immune deficiencies — would be protected because there is less chance for a disease to spread throughout a community.

See also: Some JCPS kids will soon be able to see a doctor without leaving school

With highly contagious diseases, such as the measles, a vast percentage of people in a community — some say around 95% — must be vaccinated to achieve herd immunity.

“Public health is not all about you,” Carrico said. She pointed to the recent case of the Kentucky teen who went to court to object being kept from his school because he was not vaccinated against chickenpox.

“If we continue to be siloed in our thinking, where we think we’re the only ones that matter, it certainly doesn’t bode well for our community, does it?”

But Carrico also noted gaps in the system, such as low reimbursement rates from insurance companies for medical providers offering vaccines and patchwork processes for documentation.

“Unfortunately, it takes an infection outbreak to expose a lot of the cracks that are in this system,” she said.

Measles makes a comeback in the US

The CDC said Wednesday that measles in the U.S. has climbed to its highest level in 25 years. Roughly three-quarters of those cases are in two ultra-Orthodox Jewish communities in New York. (April 24) AP, AP

The U.S. declared measles eliminated in 2000 following the widespread use of the measles vaccine. But there have been outbreaks since, often from travelers bringing the disease into the country and infecting those who are not immune.

The number of measles cases reported this year is the greatest since 2000, according to the CDC. And experts worry that complacency in not seeing the disease could result in people not being diligent about vaccinating.

According to JCPS data from March, more than two-thirds of schools’ kindergarten classes fall below the 95% immunization rate for measles.

At Dunn Elementary, less than 73% of the kindergartners were documented as having the MMR vaccine as of March. The percentage was even lower at Atkinson Academy and at Shelby and Frayser elementaries.

Read this: When children say ‘I want to kill myself’: The alarming rise of youth suicides

At JCPS’ Engelhard Elementary, school nurse Nicole Lasley is well aware that only 57% of her kindergartners and a little more than 85% of her school’s total students had documentation of MMR vaccinations.

She spends quite a bit of time working with parents to get records, and, in some cases, to get them translated from other languages.

“At the beginning of the school year, we encourage them to bring documentation,” Lasley said, adding that “we don’t want to keep anyone from school. It’s like a Catch-22.”

A JCPS spokeswoman said the latest district data, from May, shows that now 65% of Engelhard’s kindergartners have documentation of their MMR vaccines.

Still, there’s no way of knowing for sure how many of the remaining missing documents are paperwork issues and how many represent students who are not immunized.

“We still don’t have a good enough handle on that to know,” Stone said. 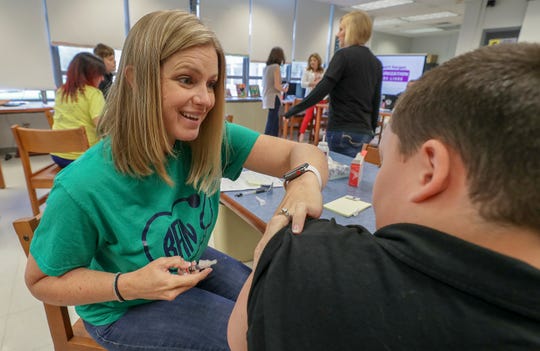 Stone said she and a colleague spent seven hours last month combing through paper records from U of L’s Global Health Initiative — which helps administer vaccines to newly resettled refugees — in hopes of finding immunization records for some of the district’s students.

Stone said she found records for about 20 students, most of them students at ESL Newcomer Academy. She said she’s working with U of L to try to find more records.

JCPS’ ESL Newcomer Academy, which serves newly arrived immigrants, had an MMR vaccination rate of 37% as of March.

Principal Gwen Snow said she isn’t worried about a measles outbreak at her school, saying her low numbers are the result of missing paperwork. She said most refugees get at least initial vaccines as part of the resettlement process.

Read this: Grad with autism is first to earn WKU special education degree

Snow said the school tries to help educate students and their families about where to go to get second rounds of immunization or other medical help and how to know which immunizations need to be updated. ESL Newcomer does not have its own school nurse.

Cunningham, the nurse with the state’s Cabinet for Health and Family Services, said the state is trying to encourage pediatricians and other health care providers to use the state’s immunization registry to keep track of patients’ vaccination records.

Cunningham said for those who are unsure they are vaccinated, it may be best to get another set of shots. 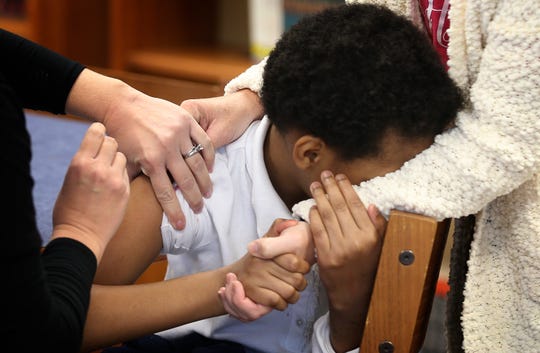 A student at Waller-Williams Environmental School is comforted as Amanda Burks, left, and Megan Habich, right, with JCPS, give vaccinations. May 15, 2019 (Photo: By Michael Clevenger/Courier Journal)

At Waller-Williams, a JCPS alternative school, 11-year-old Ashton Phelps looked dubious as he was led into his school’s media center one Wednesday in May for JCPS’ pilot vaccination clinic.

School staff had told him he was getting the shots “so I don’t get a childhood disease,” but he wasn’t really sure what that meant. His friend had told him the shots the nurses were giving were going to hurt.

Ashton held a nurse’s hand, looked away from the needle and toward Julia Lewis, a trusted employee at his school. He’d asked her to come with him to get his shot “to make him feel better.”

But he said later he need not have worried.

Ashton was one of about 15 Waller-Williams students who got shots that day, only about 15 days before the end of the school year.

Come this fall, JCPS and schools across the county and state will have to start the process of checking for immunizations all over again.

And that means yet another round of trying to explain why children need those shots and schools need the documentation.

“Hand-washing and vaccines have changed the outlook on health throughout the world,” said Doug Thoroughman, the acting state epidemiologist for Kentucky.

He looks at the numbers of children not vaccinated and worries.

“Where does the disease transmit? In places where people congregate, like schools.”

The percentage of kindergartners by school who were documented as having the measles, mumps and rubella vaccine as of March 2019.

The numbers were pulled from immunization surveys provided by JCPS.