Time’s up for deadly sarin, mustard, VX in Central Kentucky. Here’s what you need to know.

They can’t be seen and usually don’t smell. They can kill or maim— small doses dispersed in the air can choke or blister thousands. They sit a few miles from Lexington in Richmond. But not for much longer.

Chemical weapons stored in Madison County since 1940s are set to be destroyed starting in June — after decades of planning, billions of government dollars and significant anxiety of some workers and area residents.

You can’t throw thousands of shells and rockets with such poisons in the trash or blow them up. Accident-free disposal of mustard, sarin and VX requires complex procedures to minimize danger. Here are six things you need to know, according to information supplied by Blue Grass Chemical Activity and Blue Grass Army Depot.

HOW MANY CHEMICAL WEAPONS ARE STORED?

Blue Grass Chemical Activity, the agency responsible for the destruction of chemical weapons stored at the 15,000-acre Blue Grass Army Depot, oversees 523 tons of mustard and nerve agents on 250 acres.

More than 101,000 chemical-filled munitions are stored in earth-covered igloos designed to protect the agents from weather or to contain the chemicals should any escape from the aging rockets and artillery shells.

More than 1,200 employees are working to eradicate the weapons by 2023. 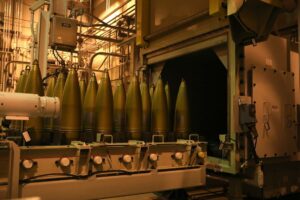 A tray of projectiles sat in the transfer room at the chemical destruction plant at Blue Grass Army Depot in Richmond. Fake projectiles were used in training and in demonstrations. But soon, the facility will be working with the real chemical weapons stored at the depot. Matt Goins

Roughly $4 billion in buildings, equipment and other infrastructure are in place to store and remove the chemicals.

The chemicals stored at the depot were all liquid in their original state. They have become thick and sludge-like after decades of storage.

About half of the stored chemicals are Sarin (also known as GB) and about 30 percent are the nerve agent VX. Both are odorless and tasteless and affect the nervous system if inhaled or absorbed through the skin. They are contained in projectiles and M55 rockets.

VX is more dangerous of the two because once released, it will stay in the environment for days or weeks before evaporating..

The third chemical is the blister agent mustard, which is also colorless in its liquid state. It appears yellow to brown when exposed to impurities.

WHY ARE THERE CHEMICAL WEAPONS IN CENTRAL KENTUCKY?

Mustard gas arrived at the depot in 1944 followed by nerve agents in 1962 as the United States produced chemical weapons like its enemies. Eventually, the weapons were deemed too awful to use and a treaty required countries to get rid of them.

“It’s like the nuclear arm’s race that occurred and is still out there,” said Craig Williams, the co-chair for the Kentucky Chemical Demilitarization Citizens’ Advisory Commission and Chemical Destruction Community Advisory Board. “It was never meant to be disassembled or destroyed. It was made to use but we never did, thankfully.”

In the 1980s, the plan at the depot was to incinerate the chemical weapons, but neighbors opposed the method. Developing a safer process took years and lots of money. 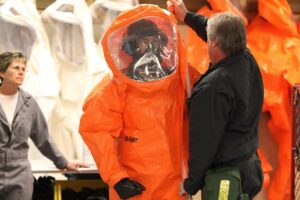 Blue Grass Chemical Activity was created in 1995, and in 2003, a contract was awarded to Betchel Parsons Blue Grass to design, construct, test, and operate the facilities that will eliminate the weapons and chemicals.

“The community is much more protected now as we move toward disposal. It’s taken entirely too long,” Williams said. “The good news is we’re on track. The bad news is that the weapons are still here, but not for long.”

HOW WILL THE CHEMICALS AND WEAPONS BE DESTROYED?

About 15,000 projectiles containing mustard will be eliminated first.

Each weapon, usually stacked like cubes, will be transferred by forklift from the igloos into a special large mobile containers that look like giant boxes with wheels. The container weighs several tons. The containers will move to a building with a detonation chamber used only for the mustard.

Each projectile will be put in a tray, moved by conveyor belt, lifted to the top of the electrically-heated chamber and placed inside.

Each munition will detonate at 1,100 degrees. The gas will be released from the broken shells and eliminated in the heat. Most of the work will be controlled remotely from a command center. 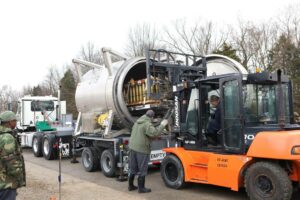 Simulated projectiles were loaded into a special container to move them to the destruction facility at Blue Grass Army Depot in Richmond. Many times, workers have practiced the process for destroying the weapons. Matt Goins

Those who have to access the plant will wear protective gear resembling hazmat suits. The workers’ gear weighs about 70 pounds.

The disposal process for Sarin and VX is different. Through so-called supercritical water oxidation (SCWO), the rockets and projectiles will be taken apart robotically, the agent will be drained and separated from the rest of the weapons’ components. Both the agent and the rest of the components will be mixed with the superheated water and sodium hydroxide to destroy the organic materials.

The remaining product will be fed into the water oxidation unit, which breaks it down into carbon dioxide, water and salts through high temperatures and pressure.

“Our workforce has worked long and hard to methodically test each plant component,” said Ronk Hink, BPBG project manager. “Through these efforts, we are demonstrating the plant is ready for agent operations.”

As of March, the employees have completed nearly 12 million hours of testing and 1,765 days without a lost-time accident. Test weapons are used in the workers’ training. 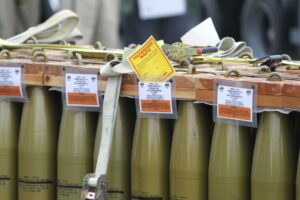 Simulated projectiles sat outside a storage igloo where chemical weapons are stored at the Bluegrass Army Depot in Richmond. Workers used fake projectiles to practice moving the real weapons to a special container and ultimately to the plant at the depot where the chemicals will be destroyed. Matt Goins

Wendi Shepherd, a demilitarization support area operator, has worked at the plant for around a year and a half. She said crews train day and night for the operation.

“It’s very beneficial in what we do,” Shepherd said. “Muscle memory is the greatest.”

HOW SAFE ARE COMMUNITIES?

Steps were included in the destruction process to make sure gas and nerve agents were not released into the environment.

Gases materialized through nerve agent destruction will be filtered before being released into the atmosphere. Water used will be recycled and reused as part of the destruction process.

The gases generated from the detonation chamber will be treated, waste will be screened and scrap metal will be decontaminated.

“It has taken thousands of skilled and experienced workers to successfully bring the project to this point,” Hink said. “Throughout each phase of the project, we have been able to instill and maintain a safety mentality that we intend to carry through operations.”

The likelihood of an accident is remote, according to the chemical activity group. Plans for each day’s tasks will be communicated to the Madison County and Kentucky Emergency Operations Centers.

The Chemical Stockpile Emergency Preparedness Program has teamed with state and local emergency management, the Army and the Federal Emergency Management Agency to protect nearby communities if an accident occurs. Within five minutes of an emergency, the chemical activity group would alert the surrounding counties’ emergency groups and 85 high-tech outdoor sirens will warn residents.

WHAT HAPPENS AFTER ALL THE WEAPONS ARE DESTROYED?

Equipment used in the destruction of the weapons will be dismantled or decontaminated in a process that will take at least two years after the last of the rockets and projectiles are gone.

Of the $4 billion infrastructure, including the buildings and equipment, about $1.5 billion can still be used after the weapons are destroyed, Williams said.

It is not yet clear what will become of the rest of the depot land and what the remaining buildings will be used for when the project is complete.

“It’s been a tremendous asset for the region in jobs, tax revenue, and all the infrastructure that goes along with bringing in 1,400 people,” said Williams of the economic benefits. “That’s a lot of people, a lot of jobs. We’re engaged now in trying to ensure that when the project ends, there is not a significant deflation in that economic impact associated with that job.”